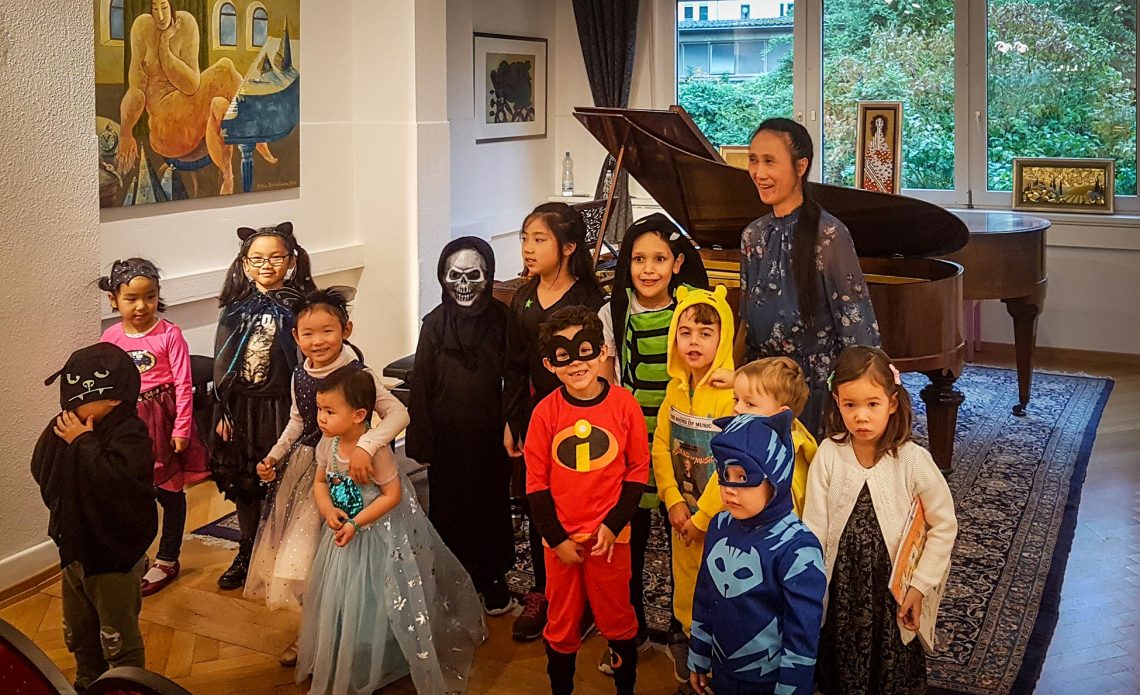 Dear friends of music and the scary horror,

On Sunday, 27.10.2019, the Musicstudio was visited by little monsters and superheroes. But instead of demanding treats and showering poor parents and teachers with tricks, they themselves had something great in their luggage! 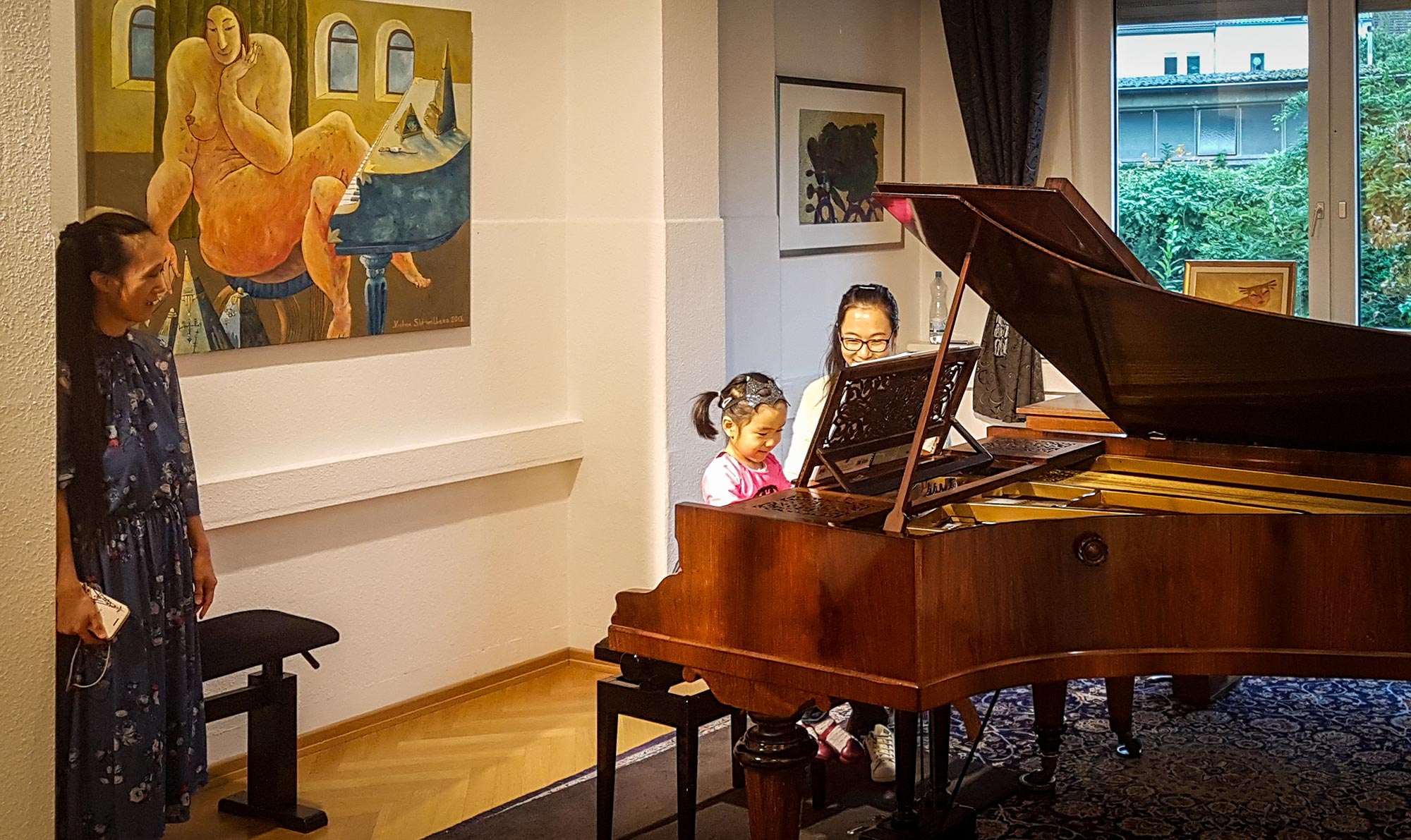 Of course, Michelle Yen-Howland also thought up something for her little ones for Halloween, which will be taking place very soon, and so we had short performances of the 4 to 12-year-old students which were then rewarded with little surprises like crazy glasses or rubber spiders. One can only imagine with what nasty little surprises the moms and dads will have to deal with…. 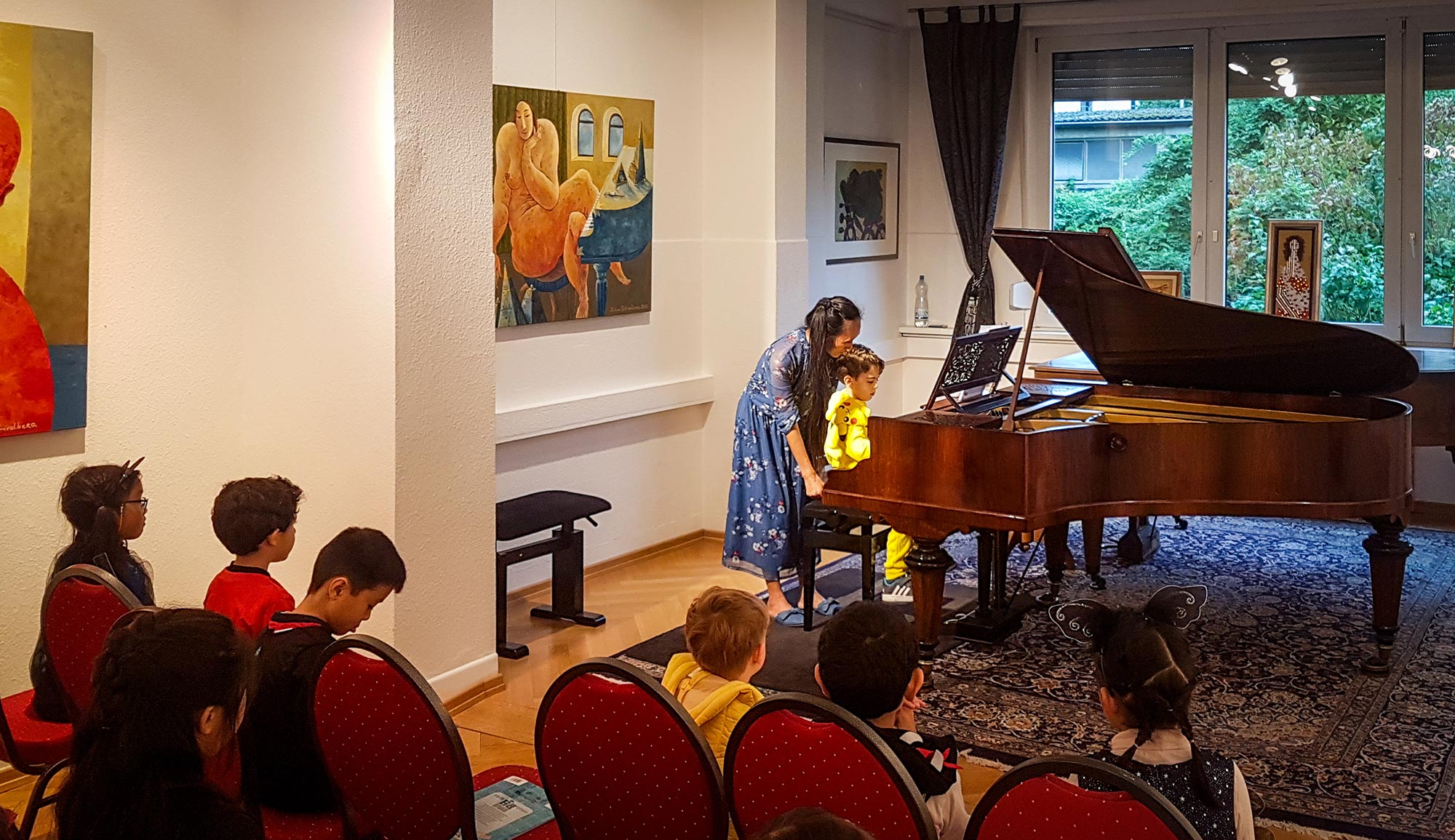 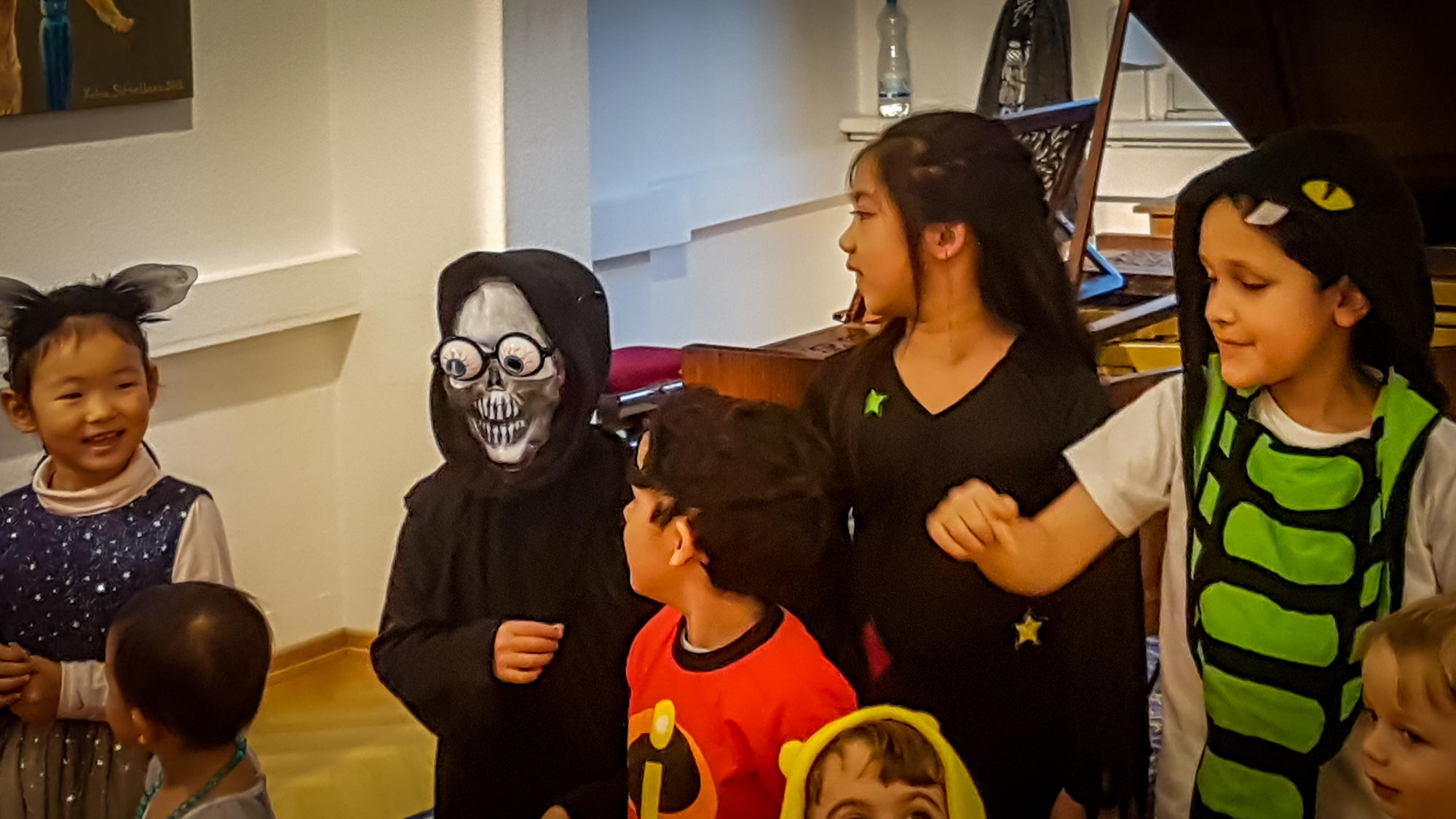 Update 28.10.2019 – Photos from the CONCERT: Sigrun Stephan (harpsichord) and Andreas Nachtsheim (lute) present music from the 16th to the 18th century, with a reading from “On the handling of people” by Knigge 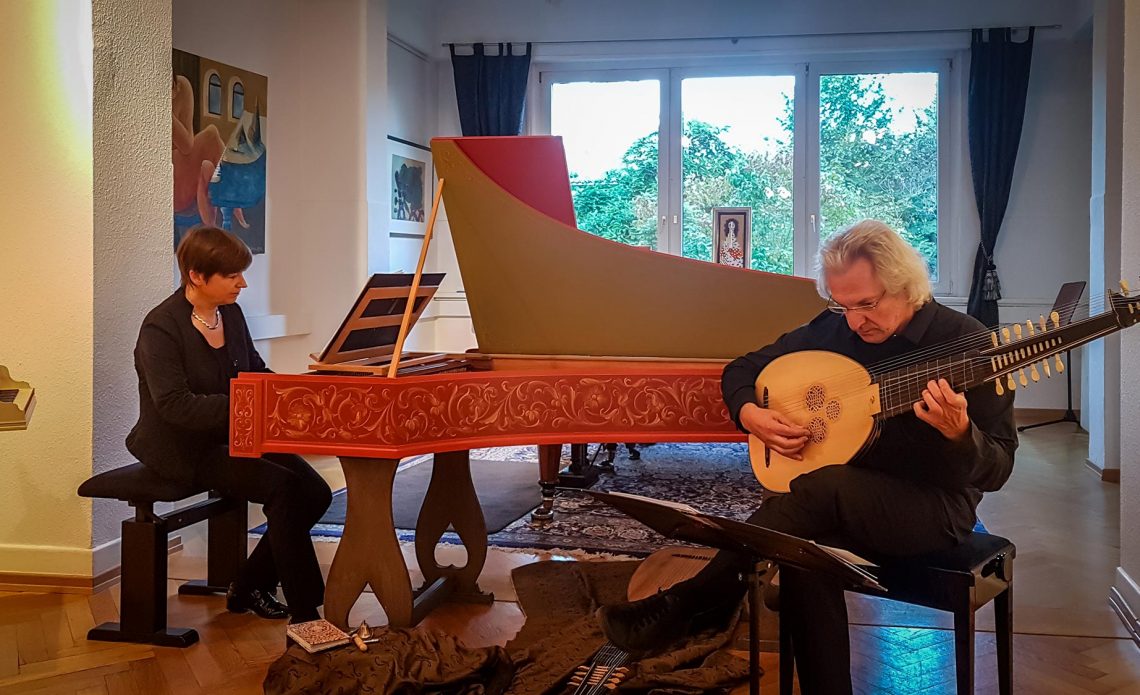 On Saturday, October 26, 2019, another concert with Sigrun Stephan (harpsichord) took place, but this time she was accompanied by Andreas Nachtsheim (lute).
The program included works by well-known and lesser-known composers from the 16th and 17th centuries, paired with a reading from “Über den Umgang mit Menschen” by Adolph Freiherr von Knigge, which was performed by both interpreters between the pieces.

When one thinks of this period, usually composers such as J. S. Bach or G. F. Händel come to mind, who certainly are not without reason among the most important representatives of their epoch. G. Frescobaldi is certainly may also still be known to many. Their works gave the listeners familiar sounds for a pleasant afternoon, especially as Sigrun Stephan once again proved that she is a proven expert on old keyboard instruments and made this demanding literature sound in a very playful way, while Andreas Nachtsheim resonated with the sonorous sound of the lute while accompanying Sigrun and then again taking the lead. Mostly, however, both musicians played on equal footing. To speak of only one lute would be an understatement, however, because there were 3 different instruments to hear, two of them correspond to the construction of instruments from Central Europe, while the third lute looks almost like a small guitar. As Andreas Nachtsheim explained at the end of the concert, this is a Spanish construction, which is due to the fact that the Spaniards wanted to create their own instrument in contrast to the Arabs who had occupied spain and who originally brought the guitar to Europe. In northern Europe, however, the lute retained for a long time its original design, which is why here the lute is rather known by its the teardrop-shaped variant.
Sigrun Stephan also had a small “baby harpsichord” in her luggage, which produced a surprisingly bright, loud sound and which was even played with the “big” harpsichord at the same time! 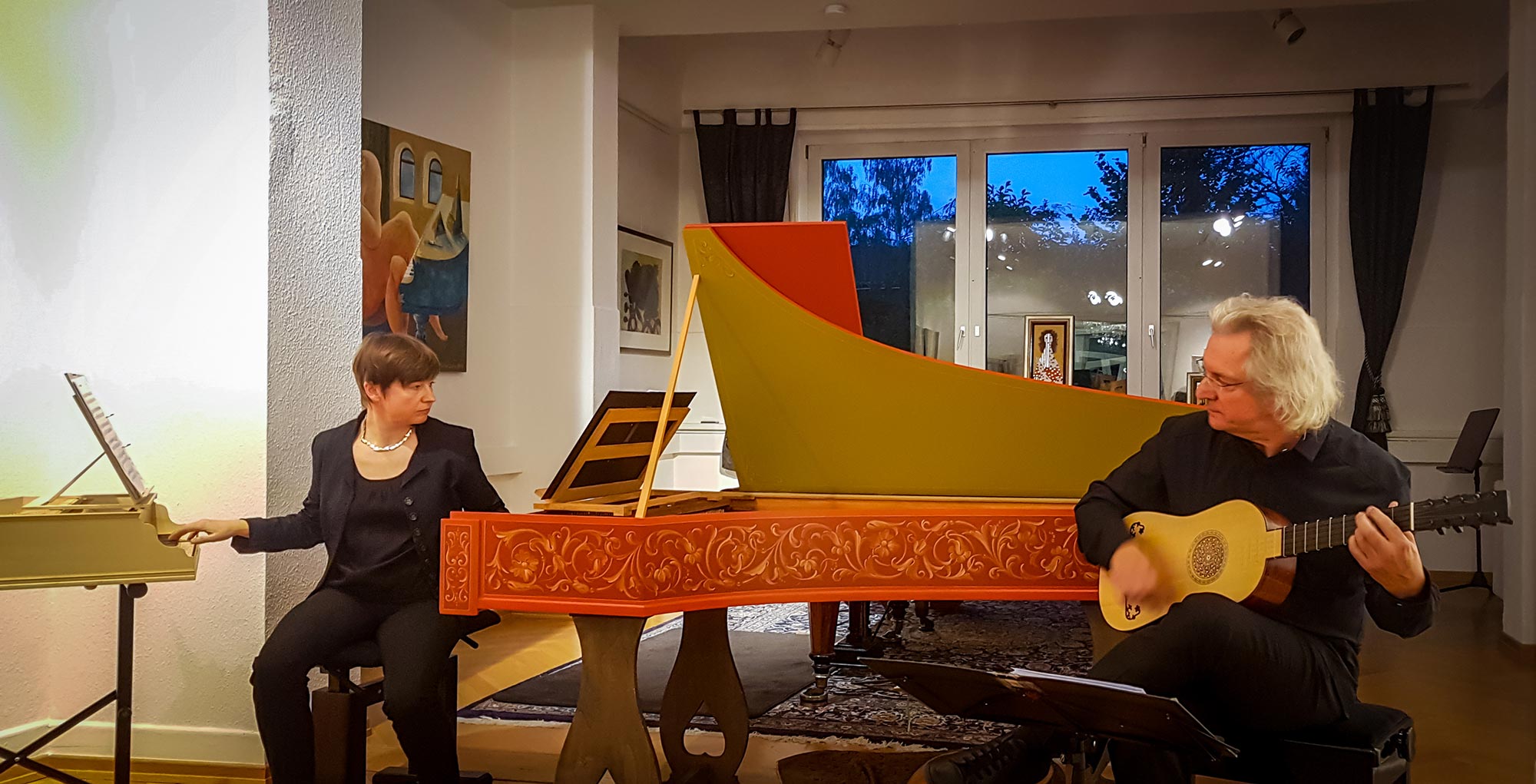 But after the audience had gradually gotten into the music with Handel, more and more pieces of even lesser-known composers were played, and one quickly wonders why they aren’t being played more often.
Thus, Stephan and Nachtsheim brought to light works of composers such as Jan Pieterszon Sweeelinck, Gaspar Sanz or Diego Ortiz, a vivid and danceable music that one would hardly expect in the “early music”. Again, this was courtly music, but the melodies are borrowed from more folksy songs and dances, so this music paradoxically sounds downright modern, especially considering the time it was written.
This alone made it worthwhile spending the late summer autumn day in the Musicstudio but – after all, there was also a reading, as mentioned at the beginning. 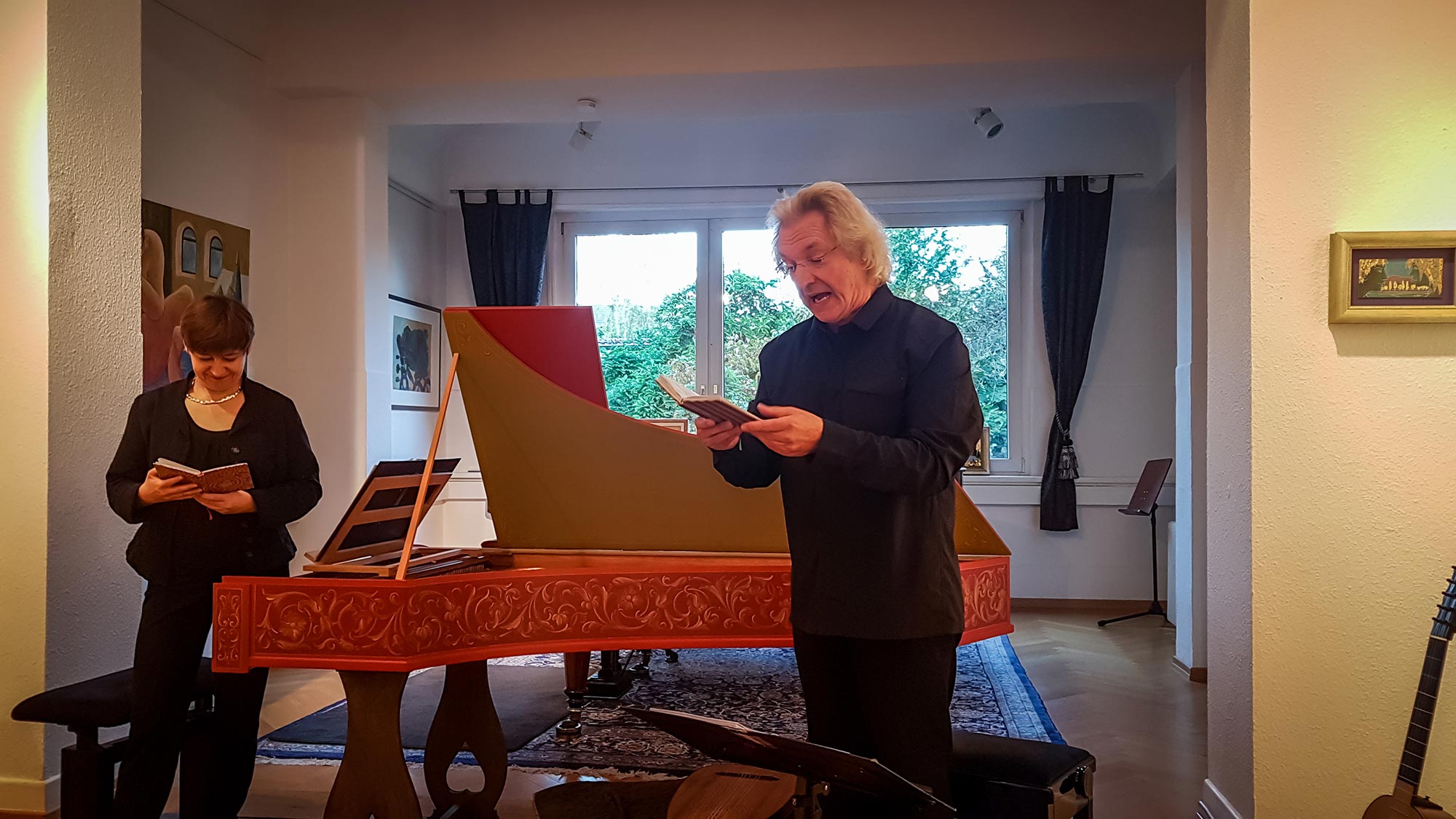 Adolph Freiherr von Knigge wrote “About dealing with people” a guidebook on human behaviors, which is similar in parts to an early psychological work, but not without humor and acumen to amuse the reader. By the way, Sigrun Stephan and Andreas Nachtsheim presented this with a lot of charm, so they immediately cast a spell over the audience. Knigge treated topics such as the four basic behavior of humans (choleric, phlegmatic, sanguine and melancholic) and their individual composition in humans. Another time he talks about dealing with women:
A man should always be well dressed, but without drifting into pompous and he has to pay attention to trifles. If the clothes are not sitting correctly, a woman will notice immediately! Also amusing was the talk about how to deal with lovers and, of course, how to deal with friends.

An exciting evening in which the program was perfectly coordinated! 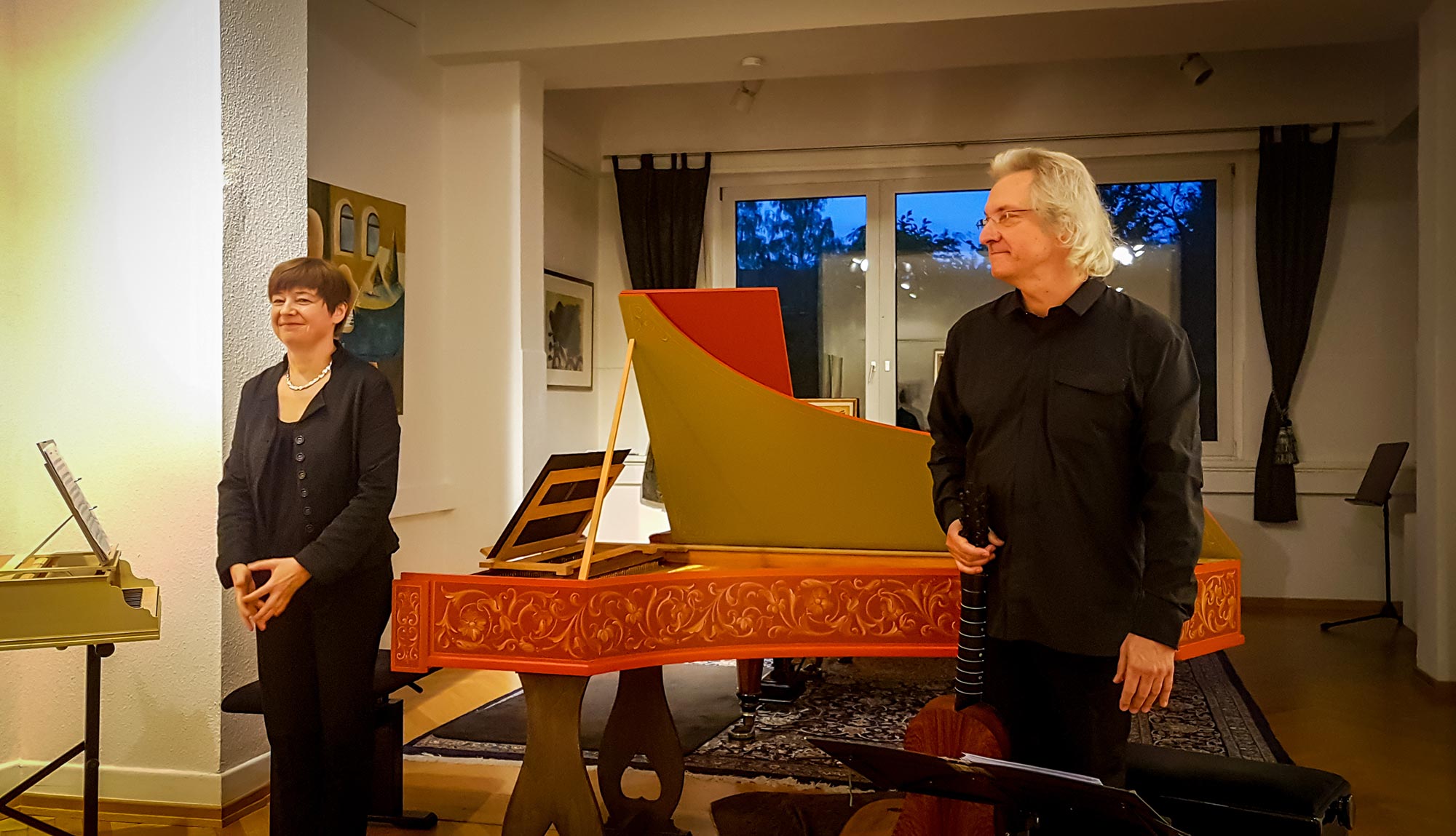 On this day once again an extraordinary program awaits you: Sigrun Stephan, who has performed several times in the Musicstudio and recently performed together with Gerald Hambitzer on her clavichord a few weeks ago, presents works together with Andreas Nachtsheim (Lute) by G.F. Handel, G. Frescobaldi, G. Sanz, D. Ortiz, M. Weckmann, J.S. Bach et al. from the 16th to the 18th century.
The concert will be accompanied by readings from the book “Über den Umgang mit Menschen” (“On the handling of people” 1788) by Adolph Freiherr von Knigge:

“… What should I wear to the reception today? – Who in this circle do I have to greet first? – How do I correctly group the red and white wine glasses on the table? – In what order does the cutlery lie next to the plates?”
These and similar questions are those to which “The Knigge” supposedly gives us an answer. But in reality this poor Baron von Knigge has never said anything about such trivial things  like ‘textile’ and ‘cuisinal’ in his writings.
His famous book “Über den Umgang mit Menschen” appeared in 1788 and was originally an educational book with reflections and suggestions for dealing with the various generations, social groups, professions and characters. They were very elaborate and worldly explanations, a kind of applied sociology. And so the chapters of this book have titles like: “On dealing with people of different temperaments”, “About dealing with friends”, “About dealing with and among lovers”, “About dealing with the great on this earth, with Princes and rich ones “,” about dealing with oneself “, but also “about dealing with scholars and artists”.
This book was later converted into a ‘book of manners’. This began after the death of Knigge, when the publisher expanded the new editions with rules of manners. Regularly more editions of the Knigge appeared later – mainly only with dress rules that had nothing to do with Knigge’s book itself.

Anonymous (from: Cancionero de Palacio, end of 15th cent.)
Mas vale trocar…
(It is better to exchange joy for suffering than to be without love)

Anonymous (from: Cancionero de Palacio, end of the 15th cent.)
Al alva venid, buen amigo…
(Come at dawn, dear friend, you are the dearest to me…)

Philippe Verdelotto (1st half of the 16th cent.)
Se mai provasti, donna
(If you have ever experienced love, Mistress…)

Born in Eisenach, the same city as Johann Sebastian Bach was born, the harpsichordist Sigrun Stephan was already filled with pride as a child. In Weimar, where she attended the special school of music and where she later on studied piano at the college, she was daily reminded by a memorial plaque for Wilhelm Friedemann and Carl Philipp Emanuel Bach that there are other wonderful keyboard instruments in addition to the piano.
The desire to explore the harpsichord brought her to the Ruhr area, where she devoted herself to historical keyboard instruments at the Folkwang University of Essen. There she also had a lectureship after completing her harpsichord studies. Sigrun Stephan plays continuo in various ensembles, is a soloist and participates in numerous CD productions.
Since 2006, Sigrun Stephan has devoted herself intensively to the clavichord and has specialized as a soloist on this expressive, sensitive instrument. Her motto “Volume proves nothing!” comes from Mark Twain.

Andreas Nachtsheim has his musical roots in rock music, but next to that as a teenager he pursued his penchant for Renaissance and Baroque music – at first on a homemade lute. Finally, he decided entirely for this early end of music history and studied lute and continuo playing and at the same time musicology.
He works as a lutenist and continuo player in a variety of occupations: he toured for a long time with the violinist Nigel Kennedy and played with such exceptional musicians as Philippe Jaroussky, Simone Kermes and Giuliano Carmignola. In particular, he is associated with the Lautten Compagney Berlin and its director Wolfgang Katschner. Another focus of his work is the continuo playing in baroque opera productions at various theaters from Hanover to Basel and from Aachen to Berlin.

The next concert takes place on 16.11.2019:
Students of Prof. Gesa Lücker play the “Well-Tempered Clavier II” by J.S. Bach