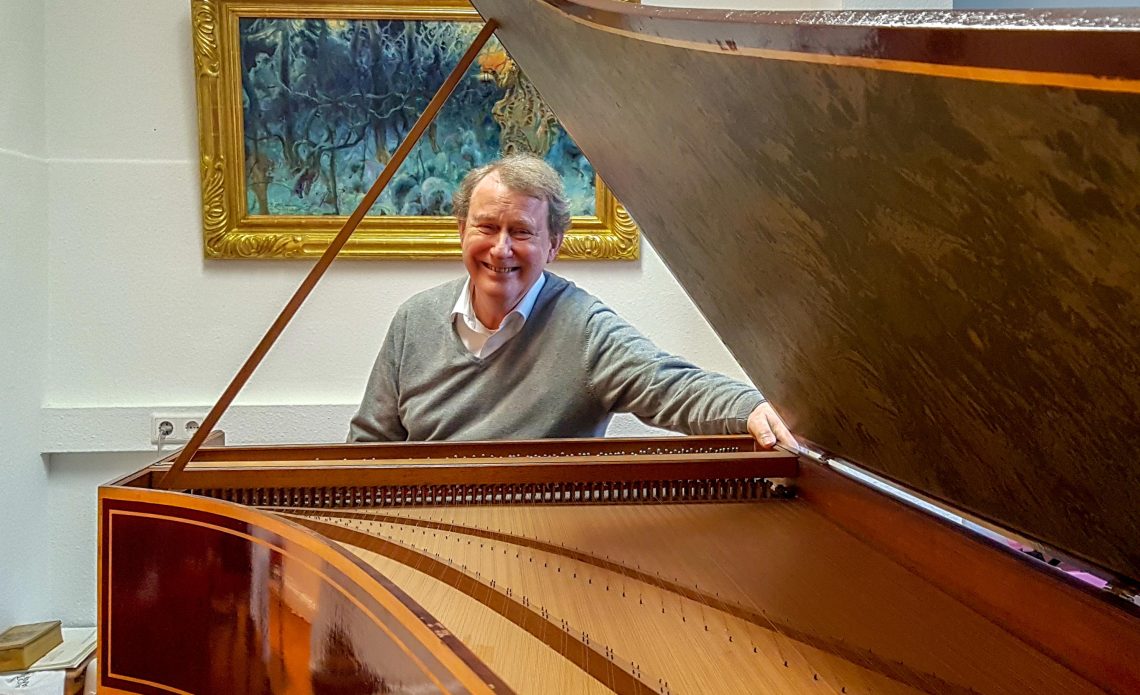 This Saturday you will hear a very special concert by the harpsichordist Ketil Haugsand! He gained notoriety as a student of the legendary harpsichordist Gustav Leonhardt and later as a professor for the harpsichord at the University of Music and Dance Cologne. He has received international acclaim for his CD recordings of Jean-Babtiste Antoine Forqueray, Louis Marchand, Jean-Philippe Rameau, Carlos Seixas, Joao Sousa Carvalho and many others, but especially for his recordings of the piano exercises I, II and IV (the so-called “Goldberg variations”) by Johann Sebastian Bach.

Harpsichord built by Martin Skowroneck, Bremen, 1985 – after German models around 1720

KETIL HAUGSAND, professor emeritus of harpsichord at the Hochschule für Musik in Cologne, counts as one of the important harpsichordists and Early Music personalities of today – appearing in several prestigious festivals and concert series in most European countries, U.S.A. Israel and in the Far East, both as recitalist, in chamber music, soloist, or conductor from the harpsichord, with the Norwegian Baroque Orchestra, the Norwegian Radio Orchestra, the Stavanger Symphony Orchestra, Lyra Baroque Orchestra, the Arte Real Ensemble and at the Komischer Oper Berlin. Important chamber music partners have been i.e., Laurence Dreyfus, Wieland Kuijken, Richard Gwilt, Peter Holtslag, Jill Feldman, Rainer Zipperling and several others.
His recordings on CD with works by Jean-Babtiste Antoine Forqueray, Jean-Philippe Rameau, Louis Marchand, Carlos Seixas, João Sousa Carvalho and others, for Simax Classics, Virgin Veritas and Linn Records have won significant international acclaim – and his interpretations of the Clavierübungen by J.S. Bach, especially the Goldberg Variations, have been singled out as highly original and outstanding landmark performances. Released on Simax Classics last year were the six English Suites by Bach and in the spring of 2014, a complete recording of Jean-Philippe Rameau’s Pieces de Clavecin.
The Norwegian born musician studied with Gustav Leonhardt at the Amsterdam Conservatory, where he was awarded the coveted Prix d’Excellence in 1975. Later he was laureate at international harpsichord competitions in Paris and Brûges and held position as harpsichord and chamber music professor at the Norwegian State Academy of Music, in Oslo, between 1974 and 1995.
Prof. Haugsand is a highly demanded harpsichord teacher, one of the most experienced in the academic field, gives regularly summer courses in Norway and Italy – and is frequently invited as jury member at international harpsichord competitions.

The next concert will take place on May 4th, 2018 at 7:30 pm.
CLIMATEKEYS Bonn: Concert with Robin Reža and discussion with the CEO of Mission 2020, Andrew Higham