Kirsten Lubach learned the profession of engraver and copper technician at the drawing academy Hanau at Gerhard Hünersen. Afterwards, she went to the Muotoiluinstituutti in Lahti, Finland for further studies with a scholarship from the Carl-Duisberg-Society, where she passed the examination to the engraving master in 1999. In 2000, she moved to Austria, Vienna, where she joined the Österreichische Staatsdruckerei (Austrian national printing house) in 2003. There she was responsible for the retouching and correction of the printing plates and stinged stamps for the inland and abroad. Since 2003, Kirsten Lubach has her own studio for copper engraving. Here she creates her lovingly-meticulous drawings, which emerge in free nature or in the Natural History Museum Vienna. In 2012, she left her profession at the Staatsdruckerei and has since then worked as a freelance artist and engraver in Vienna.

Her engravings emerge from the desire to capture the beauty of nature and making it visible. In today’s fast-paced world, where people rarely have the eye and the leisure for the small, hidden beauties, her art forms an island. The elaborate technique of the copper engraving not only requires a detailed search for the trace, but also enables these beauties to be captured and reproduced in detail. Besides being able to implement an idea or something which she has seen in an artistical way, the very lengthy, physically and spiritually demanding engravings require precision, craftsmanship, and infinite patience by hand. 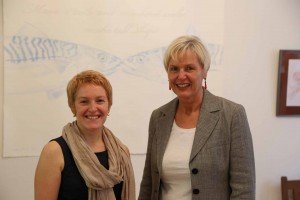 After years of strict reproduction of what was seen, she decided to break up the copper engraving. Until then, she had acted in the tradition of the old masters such as Albrecht Dürer or Sibylla von Merian and designed her works of art; A tradition and an artistic skill, which is slowly becoming extinct. She recognized that this ancient craft, which has become so rare nowadays, can only be saved by the new ways of decorating the engravings into the present and thus into modernity. The technique of copper engraving should not be watered by etching or other etching techniques, but should be resurrected as an independent art form by new design forms.

It broke the form in two respects: the printing plates now support the content by their form and abstract lines or extreme enlargements underline the ornamental of the structure. In her latest project, which she devoted her time for a year and a half, the sea was the protagonist. Here it shows that the copper engraving has arrived in modernity: detailed finds are centered by the rounding of a binocular or porthole, the traditional sepia color is replaced by a cool green blue; fish and starfish spread over the paper, occupy space and play with the haptic structure of the paper.