After cancelling high school, Kotzebue became a bricklayer and then studied architecture at the college in Munich. Afterwards, he worked as a freelance architect for architectural offices in Munich, Athens, Tel Aviv, Copenhagen, Sao Paulo and Johannesburg until 1980. From 1980 onwards, he devoted himself entirely to painting. Since the 1990s, Otto von Kotzebue has lived and worked as a painter in his studio behind the Neue Pinakothek in Munich.

Like his great-granduncle, who was also named Otto von Kotzebue and who took part in three great world journeys, Otto von Kotzebue traveled the world and kept his travel impressions on often large-format screens.

“The foggy and turner-like moods of his paintings correspond to the fresco-esque application of paint on the picture surface, which is reminiscent of Impressionist painting in its sublime luminosity. Kotzebue’s vedutes look enraptured, dreamlike, behind a veil, giving schemas of figures and perspective hints to the optimism of the ‘American dream’ an ironic and romantic distance. “

Here is a video of the introductory speech of Johannes Paqué to the exhibition “East-West” from April 9, 2016: 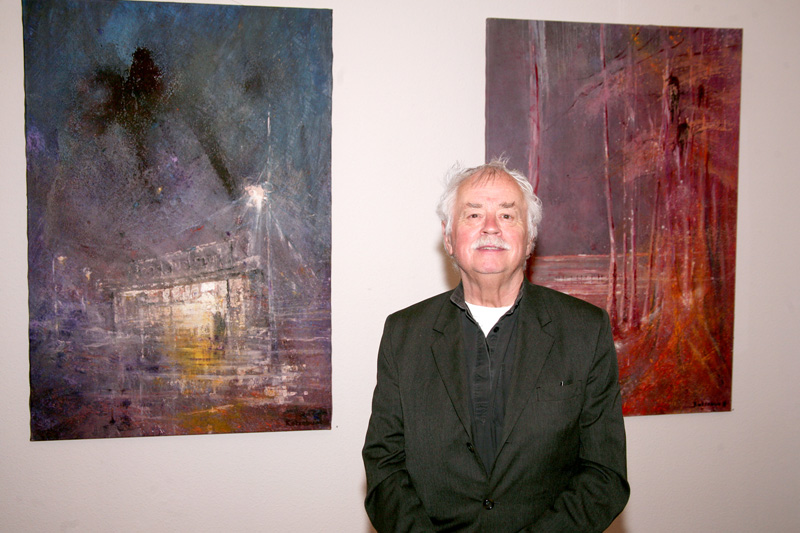 Paintings from his exhibition “Ost-West”

Otto von Kotzebue at the Musikstudio in the press:

“In Germany, the name von Kotzebue is readily associated with culture and creativity, with adventure and travel, and with intelligence and style. So naturally this description also perfectly fits Otto von Kotzebue a refined and sensitive man, an educated architect and engineer, a multi-talented designer and painter. Although von Kotzebue has lived much of his life in Germany and Italy, his paintings reflect a special love for America. From the streets of Manhattan to the plains of the West, from fast life to farm life, he captures the softness and gentleness of America, the heart rather than the hardness of America.
He manages to combine structure with design, early morning light with late evening sunsets, aesthetic sensitivity with ordinary scenery producing a hazy glow of reality, a drowsy excitement of life which attracts and stimulates, but never irritates the viewer. There is a classical restraint in his paintings as he projects his quiet blues, yellows and oranges, onto towering skyscrapers, rugged oil wells, departing landing strips, or country landscapes.
Von Kotzebue seems to challenge the observer to be as creatively relaxed as he is by suggesting a mild incompleteness in his paintings especially as one ponders a solitary man resting in full contentment in the middle of metropolis.
Otto von Kotzebue is indeed a very unique artist, most difficult to categorize, not quite impressionist, who portrays an honest late 20th century, industrial world as we would like it to be.” 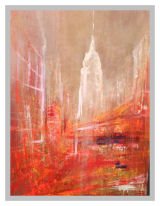 With Otto von Kotzebue the spectator of present exhibition is invited to travel intellectually, visually, thoughtfully through some places of Mexico, then the United States, from there to various country sides, towns, Cities, sites of several countries in Middle Europe (Belgium, Eire, Germany, Spain, Italy) –as the basis of a rich selection of water colours. These maintain the artist’s own impressions, own thoughts about the corresponding atmosphere and possible development. It is not to show a site in the most precise way with regard to its geography and appearance, but to make the inner life, the inner feeling and intellectual atmosphere of a location visible. The water colours in their subtile language are accompanied by two articles and evaluations of Otto von Kotzebue’s art written by Dr. Smith, Wiesbaden and by Dr. Heybrock, Mannheimer Morgen.

America’s (un)fulfilled dreams –Notes on the paintings of Otto von Kotzebue Otto von Kotzebue, an architect born in 1936, whose work has taken him around the world and who took up painting only a few years ago, is one of those soft-spoken, thoughtful kinds of people. This sets him apart from his famous great-great-grandfather, who is considered to have been one of the most agile and bustling figures of his timest August von Kotzebue (1761-1819), was a playwright who specialized in comedies, and whose plays, numbering around 200, were instrumental in enabling the German-language theatre of his time to survive. 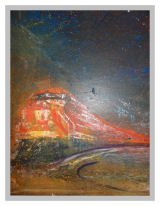 Although we can assume that August’s comedies flowed effortlessly from his pen –he had a wealth of ideas that were eminently effective on the stage –we should nonetheless not expect his descendant, Otto, to paint from an ingenious, “naive” awareness of colors and forms. Otto von Kotzebue does not paint because he thinks in terms of color, but rather because he is compelled to give critical expression to his impressions of reality. His painting is the result of his personal concerns. His pictures appear shy, austere and reserved. The beholder will discover that the unfolding of his artistic motifs does not regale the eye with a delightful sense of recognition; instead, they will reveal their secrets only if we are willing to take the time to approach them questioningly. These pictures “speak” an entirely different language depending on whether you look at them close up or from a distance, and it is well worth regarding them from both vantage points. The initial Impression of cheerful vitality turns into a catastrophic vision of a meaningless future upon closer examination. Kotzebue paints the end of the American Dream, this dream of happiness, success and indomitable youth. Many people are likely to have difficulty recognizing the places that Kotzebue has Chosen to capture on canvas in his travels in the U.S.Can Chicago and New York really be so empty and arid, exhausted and desolate? Kotzebue saw, and still does see, America with the critical, detached and ever horrified eyes of a European.
He looks behind gaudy facades, ignoring almost completely the glamour of the billboards and the imperious one-upmanship of the huge skyscrapers. His searching eye has quite a different focus: on the people and the essence of their lives. He poses questions which are not included in the formulation of the great American Dream and, accordingly, are not included in America’s thinking, such as what its society intends to do with all that happiness and success –should these goals ever be achieved in reality.
What can people possibly gain from all this? Maturity? Insight? Responsibility? And again, is it really true that successful people are necessarily better, ethically superior to their fellows? These unspoken questions embodied in the paintings thrust the beholder into an appalling void; that very void of emptiness and loneliness that Kotzebue mercilessly brings to light. The bridges in Manhattan? A homeless person shuffles along the waterfront in the Gold, gray mist. Sunset in Chicago? The painter’s Gurt note on this pictures “Hegt, haze, loneliness”. Las Vegas? Kotzebue: the almost, perfect reflection of the American Dream…gaming, feeding upon the carrion of consumerism with energy and self-delusion”. Otto von Kotzebue sees the crisis currently besetting America as resulting essentially from the fact that everything ever dreamed of has now been achieved. Hence nothing is left that is worth striving for, the erstwhile Pioneer Spirit has lost its purpose. When Seen through the eyes of Europeans, however, who cannot but recognize that the U.S. is “a metaphor of our civilized, technologi- cal world” (Kotzebue), the suspicion arises that these dreams were perhaps off base to begin with. Happiness is, after all, fundamentally different from all those things with which Las Vegas loves to inundate us and, as far as the existential Conditio humana is concerned, our technological civilization has hitherto successfully relegated anything going beyond banal material needs to the closet of oblivion.