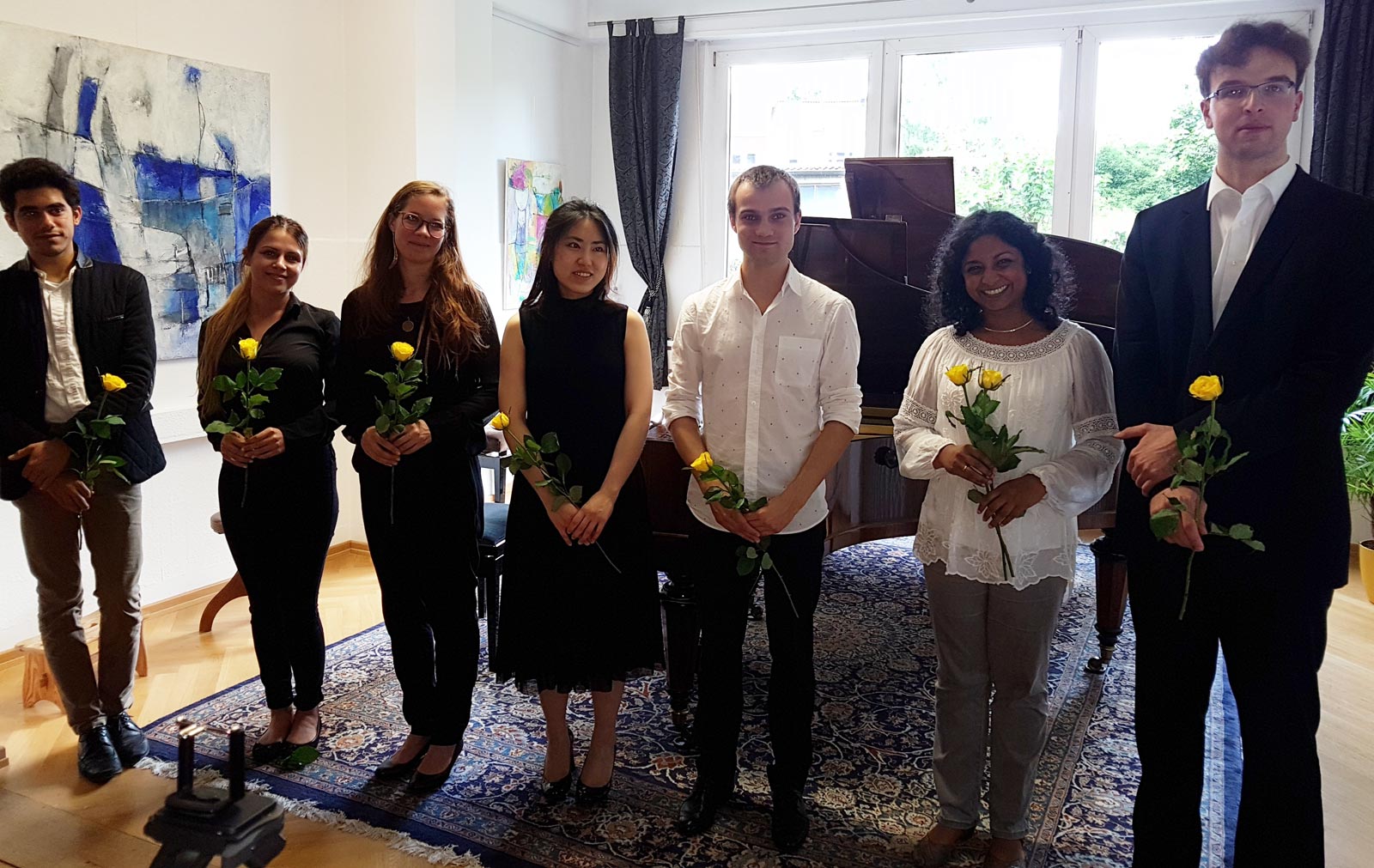 As you surely already know, the Musikstudio enjoys giving young talented students the opportunity to perform in front of an audience again and again. This is usually the case at the vernissages, but every now and then one or the other project of a complete class at an university offers itself to be performed. The last such event took place in 2019 with students from Prof. Gesa Lücker.
This time, students from Prof. Sheila Arnold can be heard again and, in line with the year 2020, they have created a project around the works without opus numbers (WoO) by Beethoven! Prof. Arnold writes the following:

“Do you know Beethoven?”

The Cologne University of Music and Dance addressed this question at the piano night on Friday, November 27, 2019. We will be presenting one aspect of the extensive program in detail in our concert, in which almost the entire class of Sheila Arnold will be heard.
We hardly know of numerous works without opus numbers (WoO) that remained unpublished during Beethoven’s lifetime.
Among them are pieces from Beethoven’s time in Bonn as a child and teenager. They are works by the learner, the experimental, the curious, composition exercises in counterpoint, charming dance movements in the style of the pieces from the Bach and Mozart families’ music books. Also occasional works for personal dedicatees who clearly indicate the album pages of musical romanticism.
In turn, in the many variations without opus numbers, we get a vague idea of ​​his nature as a pianist who conquered the world.
Compositionally shaped by CG Neefe in the sense of CPE Bach and JS Bach and well armed with his own desire for innovation and perfection of his piano technique (harpsichord, organ and especially fortepiano), he gets the chance to leave the small town of Bonn and the Viennese world to conquer. He also says goodbye to his father, who, to the best of his knowledge, gave him a good education, but for a long time did not allow him to improvise, because he believed that the written works had to be adequately skillful before he could follow his “bees in his bonnet.” The urge for inner liberation and unconventional renewal was exuberant. Based on the mentality of a musically free-spirited CPE Bach, Beethoven experienced his heyday in Vienna in his twenties and thirties as an outstanding pianist who, in various piano duels, in particular through his extraordinary, avant-garde improvisational art, frightened some of his colleagues – both with his refined playing technique and speed in the Allegro, as well as his intimacy and mastery of the affects in the Adagio, which sometimes cause tears in his audience – which in turn make him laugh at the expected emotional success!

Students of Sheila Arnold play from the works without opus numbers

By filling in the fields below, you can conveniently reserve your tickets. Please mind our privacy policy:

“Without exception, this is the most eloquent, poignant, and revelatory Schubert piano playing I can remember ever hearing.”
FANFARE 2017

​Sheila Arnold belongs to a generation of pianists who feel as much at home on the modern concert grand as on the fortepiano: the symbiotic feedback between the two instruments never ceases to inspire her. Her repertoire spans keyboard music ranging from the 1700’s to world premieres of contemporary music.
Very early on, her triumph as a finalist at the Clara Haskil Competition in 1995 and the Mozart Prize awarded by the Wiesbaden Mozart Society at the Salzburg International Mozart Competition reflect her special affinity with that composer: Sheila Arnold’s Mozart renditions have always been euphorically acclaimed by reviewers and audiences worldwide.
Ms. Arnold studied under the guidance of Heidi Köhler and Karl-Heinz Kämmerling, and went on to garner a considerable number of first prizes and successes at German and international competitions. She was also selected for a series of scholarships and awards, leading to extensive worldwide appearances since her youth. Many of them were recorded for radio and television broadcast, as well as on CD.
Renowned music festivals have invited Ms. Arnold to perform in Europe and the US. She has collaborated with well-known orchestras such as Lausanne Chamber Orchestra, the Orchestra of Bonn Beethovenhalle and Prague Chamber Orchestra, and with conductors such as Jesús López Cobos, Marc Soustrot, and Michael Hofstetter. Her chamber music partners include the likes of Nina Janssen, Sergio Azzolini, Wilhelm Bruns, Ralf Manno, Guido Schiefen, Michael Faust, Isabelle Faust, Alexander-Sergei Ramírez, the Mandelring Quartet, and many others. Inspiring encounters and collaborations with renowned musician colleagues have taken place at Festivals such as the Spannungen Chamber Music Festival (Heimbach) or the Music Festival in Hambach (Neustadt).
Sheila Arnold’s previous CD with works by Brahms and Schumann was released in 2010 and featured as a CHOC selection in Classica, the French classical music magazine. Her latest CD recording on Franz Schubert has been highly acclaimed by leading critics.
The next CD “Écoutez!” is going to be released in Spring 2018 and will be dedicated to the works of Claude Debussy, Toru Takemitsu and John Cage.
In 2006 Ms. Arnold was appointed piano professor at Cologne Musikhochschule. She is frequently invited as member of national and international piano competitions and gives regular masterclasses.
Many of her students have won prizes and scholarships at national and international competitions.

Announcement:
The next concert will take place on May 16, 2020 at 5 pm:
Susanne Herre and Yin Chiang present “Pour la belle Josephine” – works for mandolin and piano by Beethoven, Hummel, Bortolazzi and Feliziano

Current exhibition: In honor of Beethoven – A collective exhibition
The gallery is open on saturdays between 14 and 18 pm.
After telephonic agreement the gallery can also be visited at other times.
Blücherstr. 14, 53115 Bonn
Phone: 0228-41076755