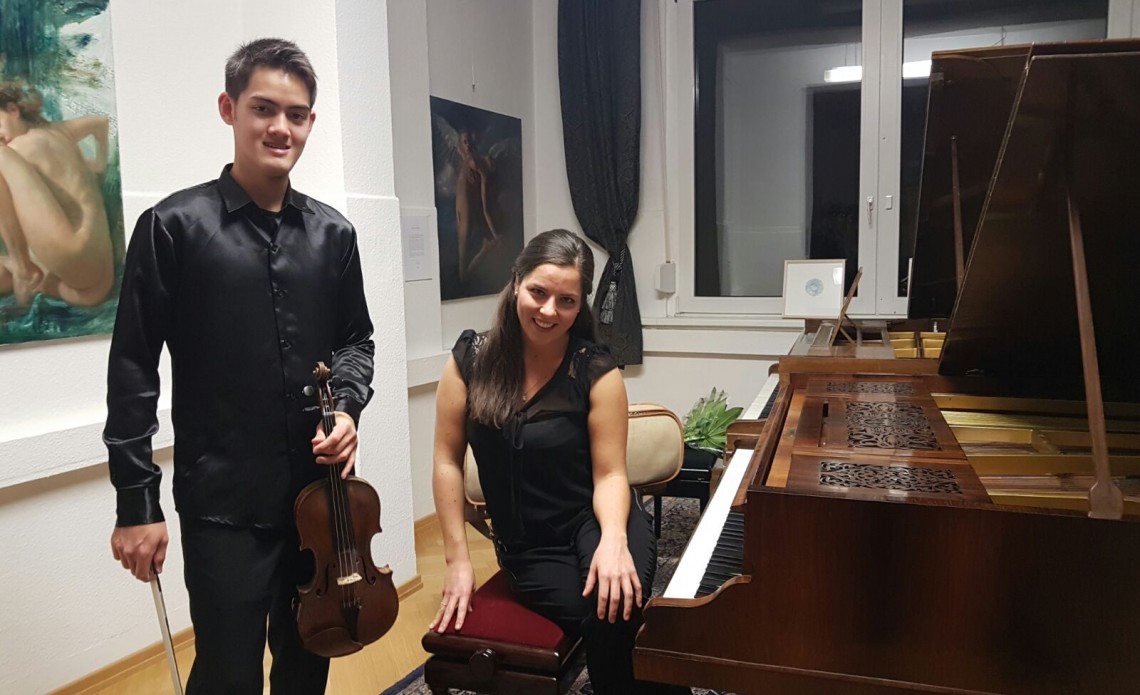 On the 19th of November 2016 the last concert of this year took place in my premises. Franziska Staubach at the piano and Ryan Howland on the violin gave us a varied program, ranging from classical to modern.
Franziska began the evening with Olivier Messiaen’s “Alouette Calandrelle”, a comedic and somewhat crazy as well as ingenious piece. In contrast to this modern piece, she played the “Ballad No. 4 in F minor” by Frédéric Chopin, leading the listeners into the vast emotionality of this work – absolutely fantastic. The special feature about these two pieces was that both grand-pianos in my studio were used for the first time in the same concert. The Pleyel grand-piano from the year 1937 may have been similar to an instrument that Messiaen (*1907) might have used. The Kaps grand-piano from 1876 with its Érard mechanics also fit perfectly into the time of Chopin. A real special treat for the audience as well as for the pianist!
In the follow-up, Ryan Howland led the audience into the classic with “Sonata No. 2” by Johann Sebastian Bach. After a short pause we went on with the highly virtuosic “Nel cor più non mi sento” by Niccolò Paganini, which demanded everything from the violinist and was rewarded with a great applause from the audience.
The final piece was the “Violin Concerto in D Minor op. 47” by Jean Sibelius, which was performed by both musicians and once again showed all the emotionality and expressive possibilities that both instruments and their players have to offer.

Not only the adults were enthusiastic about this concert, but also the many children who listened intently to the music and maybe somebody might have thought: “Is this my piano teacher? Wow!”

I am pleased to present to you two young musicians who will sweeten your evening with music for violin and piano. Franziska Staubach has already performed several times in my studio and has been able to inspire listeners with her outstanding four-handed play together with Lisa Richter. Since summer this year, she is teaching in my premises, while she finishes her master degree at the HFMT in Cologne in music education and as a concert pianist.

Ryan Yen-Howland originally came from Canada and has been living in Germany for about a year. He already visited Europe, the cradle of classical music, a few times, since he has been striving to become a great violinist. For this, no obstacle is too great for him, and he takes a lot in order to learn from the best violinists.

This evening will be for the two young musicians, who will fascinate the listeners with their enthusiasm for the music!

Entry: It is asked for a donation for the artists.

Born into a German-Croatian family, Franziska Staubach already had her first experiences with the piano when she only was four years old. At the age of ten Franziska received violin lessons under Michael Wieck in Stuttgart, two years later she received additional organ lessons from Christian Schmid.

Franziska further expanded her musical skills on the piano under Toshiko Yasuda-Brommer, who at that time taught at the University of Music and Performing Arts in Stuttgart. During that time, Franziska recieved numerous prizes both for her performances as a soloist and in the field of chamber music at competitions from “Deutscher Tonkünstler Verband” (“German Musician Association”) and “Jugend musiziert” (“Youth makes music”). Recently she won the third prize of the “Val Tidone Competition” Cat. D in Italy and a special prize of the Staccato Publisher (Piano News) at the “Anton Rubinstein International Piano bachelor award” in Düsseldorf in June 2015.

Franziska recieved other musical impulses as a longtime student of Prof. Daniel Röhm before she began with her piano study at the HfMT (Hochschule für Musik und Tanz – University of Music and Dance) in Cologne under Prof. Gesa Lücker in 2011. During this time she developed her musical skills at numerous master classes (among others Prof. Konrad Elser, Prof. Markus Bellheim, Eduard Zilberkant, Joseph Paratore, Prof. Pierre-Laurent Aimard). In addition to her solo play, Franziska puts another focus in the field of chamber music and the art song and performs regularly with various musicians.

Currently, Franziska has a scholarship at YehudiMenuhin Live Music Now Köln e.V.. Since the beginning of her studies, Franziska is working at various music schools as a piano teacher, such as the Rheinische Musikschule in Cologne and the Musikstudio und Galerie: Gabriele Paqué in Bonn, where she teachers children and teenagers in German. 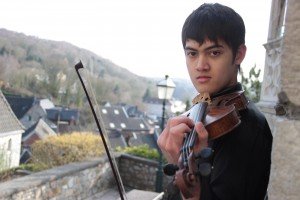 Ryan Howland began studying the violin at the age of 5. He has studied with numerous acclaimed violinists and pedagogues, including Prof. Zakhar Bron, Maurizio Sciarretta, Igor Volochine, Rudolf Koelman and Viktor Tretyakov. He has performed many public recitals in Canada, Taiwan and Europe. Some of his awards include 1st prize in both the Victoria and the BC Provincial Performing Arts Festival in Canada and 1st prize in the International Grand Prize Virtuoso Competition in London 2015. He has also received scholarships to partake in the National Young Artists Precollege in Ottawa. Ryan Howland is currently studying in the Blackmore International Music Academy in Berlin with prof. Viktor Tretyakov. He plays an Italian violin made by Dom Nicolaus Marchioni in 1735, loaned to him by the Chi Mei Museum in Taiwan.