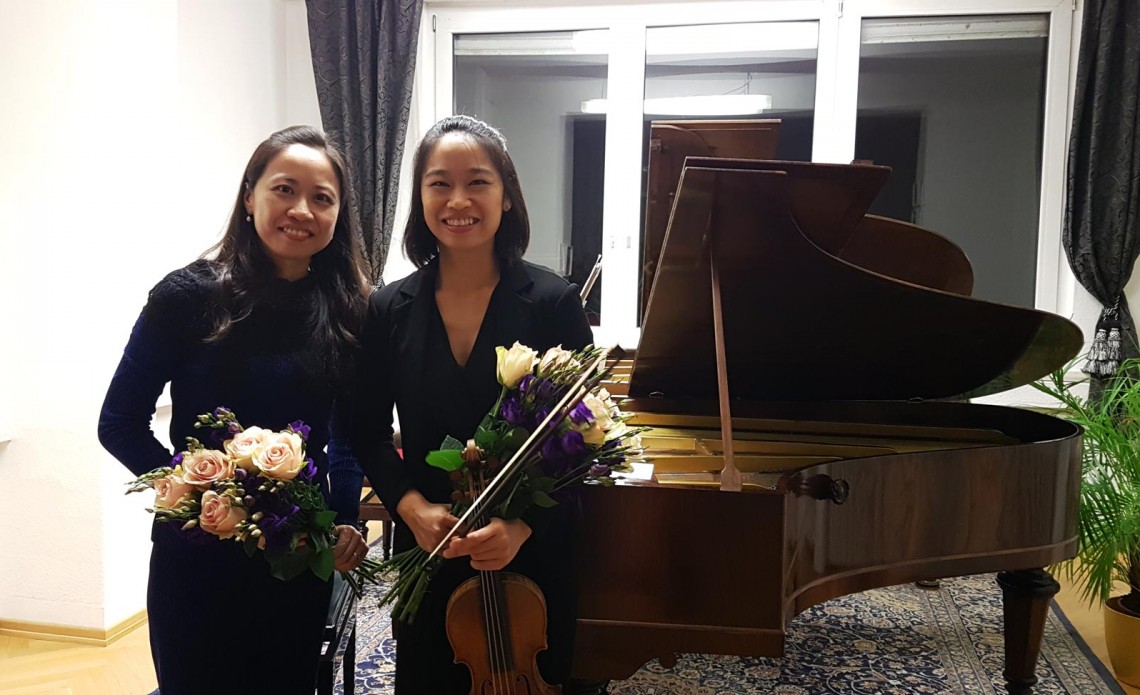 The two sisters Yin Chiang and Huei Chiang present a quite extraordinary program! Originally from Taiwan, they both moved to Europe, where they completed their musical education and are now working on numerous projects, such as orchestras in Germany and Austria.
Together they form a wonderful duo of violin and piano, which is not only dedicated to the works of well-known composers of chamber music, but also to contemporary Chinese and Turkish literature, which exceeds both in tonal beauty and the exotic charm of unconventional interpretations of both instruments.

This is the last concert of this year in the Music Studio. I wish you all a Merry Christmas and a Happy New Year!

Yin and Huei Chiang are two sisters that grew up with the same musical education, studying first at the eliteschool in Taipei and later in the University “Mozarteum” in Salzburg. Although they often played together during their childhood, their first formal performance took place in the Lucerne Festival Academy in 2006. Since then they have undertaken many concert tours together throughout China and Taiwan.

Yin Chiang was born in Taipei, Taiwan, where she received her first piano lessons at the age of 4. Before moving to Europe in 1995 she attended specialist music schools in Taipei. She then continued her piano studies at the University “Mozarteum” in Salzburg with Peter Lang and Hans Leygraf, where she gained the title “Magistra Artium”. Subsequently, she studied with Pierre-Laurent Aimard at the Musikhochschule in Cologne graduating with the “Konzertexamen” for chamber and contemporary music.
Her first solo performance with orchestra took place when she was 11 years old, in a tour throughout Taiwan. At the age of 16 she performed in a tour in China. Since then she has performed in many European countries as a piano soloist and chamber musician with, amongst others, the Salzburger Kammerphilharmonie, the Leopoldinum Chamber Orchestra, the Salzburger Musici Quartet, the E.T.A.Hoffmann Trio, the Cologne Vocalsoloists, the Duo Ensemble Présence, the Ensemble Garage, the Ensemble 20/21, the Ensemble DuoPlus, the Artwork Ensemble and the Gunnar Berg Ensemble. Moreover, she was invited to the International Ensemble Modern Academy, Klangspuren festival (both Austria), Lucerne festival Academy (Switzerland), Acanthes festival (France), Temporada Avuimúsica festival (Barcelona), the New Music Week (Shanghai), the Hörfest (Germany), Music with innovative Expressions (Taipei), China Time Festival(Hamburg). In 2002 she made her debut in the prestigious Mozartwoche festival in Salzburg playing the world-premiere of Spencer H. Shedler’s “Refraction” for piano solo. She was engaged as both, a pianist and music director responsible for two contemporary opera productions at the Kammeroper Köln (Cologne Chamber Opera). These were “Die Edelweißpiraten” by Snezana Nesic in the season 2007/08 as well as  “Weiße Rose” by Udo Zimmermann in the season 2008/09.
Yin Chiang has received scholarships from the Austrian Ministry of Education, Science and Culture, the Gisela and Erich Andreas foundation in Berlin and the NRW Arts Foundation in Germany. Her performances of works for solo piano by Luciano Berio have been broadcasted in Italian television, and many of her live performances have been broadcasted by radio companies such as Ö1, DRS2, WDR, and the “Institut de Recherche et Coordination Acoustique/Musique“ (IRCAM).
The focus of her artistic work is contemporary music, demonstrated by her collaboration with Ensemble Modern, Ensemble InterContemporain, and Pierre Boulez, as well as with various composers, such as György Kurtág, Helmut Lachenmann, Wolfgang Rihm, Marco Stroppa, Toshio Hosokawa, and Matthias Pintscher, only to mention a few. Since 2008 she has regularly given concerts and masterclasses about contemporary music at different music universities in China and Taiwan.
In 2006 she was granted the Austrian citizenship. From 2011 to 2012 she taught in the Shanghai Conservatory of Music. In 2012 she founded the C-Camerata, Ensemble for the contemporary music in Taipei. From 2013 to 2015 she translated the whole book of C.P.E. Bach’s “Versuch über die wahre Art das Clavier zu spielen”. In 2015 she recorded the CD “C.P.E. Bach: 8 Sonatas for the Keyboard”.

Born in 1980 in Taipei, Taiwan, Huei Chiang received her first piano lessons at the age of four, and a year later began studying the violin. She attended specialist music schools and won piano and violin prizes in Taipei’s Competitions.
Following her graduation from the Affiliated Junior High School of the National Taiwan University in 1996, she moved to Austria in order to continue her studies with Maestro Ruggiero Ricci and his assistant Chris Nicholls at the University Mozarteum Salzburg. She attended masterclasses with Viktor Pikaizen and Mauricio Fuchs, studied chamber music with the Hagen Quartet and performed as a member of the Leopold Mozart Orchester in Austria and in Germany.
In 1999 she accepted a position as a first violinist in the Orquestra de Cambra de L’Empordà (Spain), at the same time as completing her studies in Austria. A year later, she graduated having attained the first Diploma with Distinction.
From 1999 to 2011, Huei Chiang lived in Spain, performing with the Orquestra de Cambra de L’Empordà. Since 2002, she was assistant concertmaster of the same orchestra, and also of the Orquestra Filharmònica de Catalunya. She performed in this capacity and as soloist throughout Spain and Europe, in the USA, Argentina, Canada, Malaysia, the Philippines, Indonesia, Singapore, Taiwan and China.
She has participated in several international competitions and in 2005, she won the 3rd prize in the International Louise Henriette Competition in Germany, where she was also awarded the loan of an Italian master violin by the Maggini foundation in Switzerland.
In 2006 she was invited to participate in the Lucerne Festival Academy where she worked with members of the Ensemble InterContemporain and performed concerts under the direction of Pierre Boulez in the Lucerne Festival. In 2007, she formed a piano trio in Cologne, Germany, where the trio studied contemporary chamber music repertoire with pianist Pierre-Laurent Aimard. In November 2010, she collaborated with the Ensemble DuoPlus (Germany) when it was invited to perform in the “3rd New Music Week” Festival at the Shanghai Music conservatory, and to give concerts and masterclasses in China and in Taiwan (Wuhan Conservatory of Music, Changiang University in Jinzhou, Hangzhou Normal University, Forum Auditorium in Taipei, lecture concert in Taipei Municipal University of Education, masterclass in the Affiliated Senior High School of National Taiwan Normal University).
Besides music she has also developed a strong interest in yoga practice and philosophy. In 2010 she became a certified yoga teacher, and started presenting her own project “Musica Chakra” throughout Catalonia, which is a special session combining yoga, meditation, and solo violin music by Bach, where she leads the audience as a yoga teacher and also performs as a violinist.
In 2012 she came back to University Mozarteum Salzburg to continue her Master’s degree study with Professor Harald Herzl, and in January 2014 she graduated with Distinction. She has been invited to perform regularly with Mozarteumorchester Salzburg, and has been the guest player of the first violin in the Orquesta de Cadaqués (Barcelona, former conductor Laureate Sir Neville Marriner).
Besides working as an orchestra musician, Chiang is also a member of the C-Camerata Taipei since 2012, an ensemble combining western and eastern instruments in a unique manner and specialises in contemporary music. In 2014 she was invited to perform the Brahms violin concerto with the Knox- Galesburg Symphony in the United States.
Since 2015 Chiang has been the first violin member of the Tiroler Symphonieorchester Innsbruck. In 2017 she completed the postgraduate study of baroque violin with Hiro Kurosaki at the Mozarteum Salzburg.
As well as playing, Huei has also developed her talent in writing in a very early age, her childhood dreams were to become a musician and a writer. Here you can find her articles about traveling as a professional musician, poems and short stories inspired by everyday life, by her working and playing in an opera house (favorite opera: Turandot, which represents love!) originally written in English, German and Chinese. Enjoy!

I wish you all a Merry Christmas and a Happy New Year. The spring 2018 program will soon be announced.