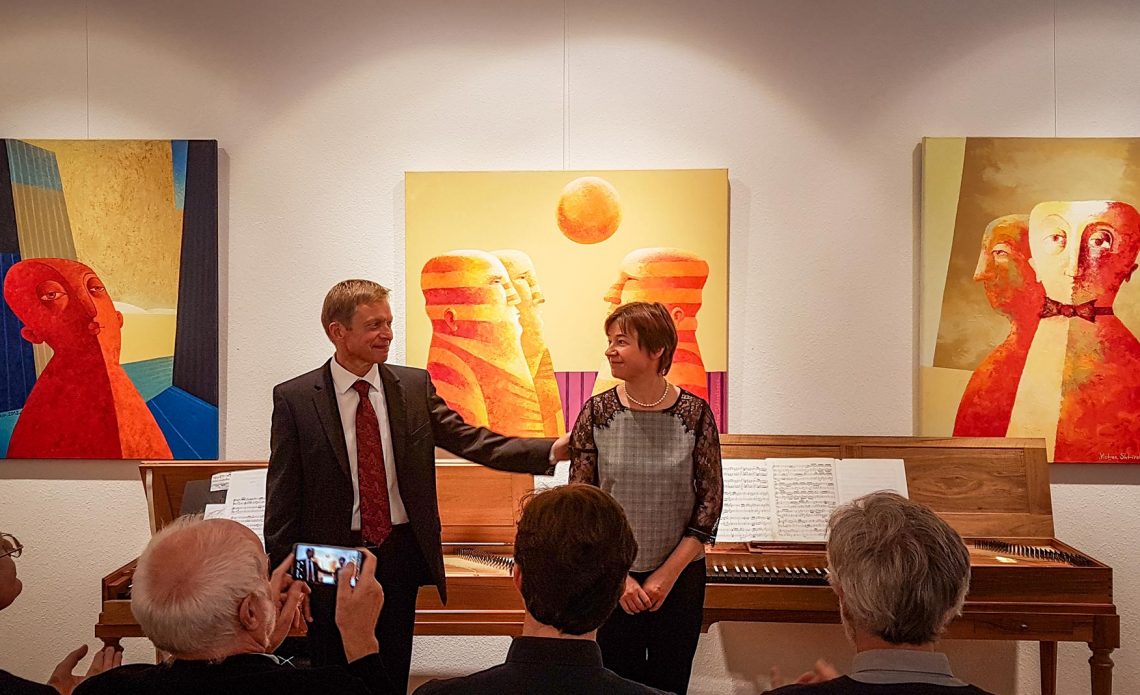 On September 28, 2019, the charming concert took place on two clavichords by Sigrun Stephan and Gerald Hambitzer.
Being able to hear the clavichord is a rarity. But hearing two artists together on these instruments is a true rarity! And so many lovers of old music gathered in the Musikstudio that day to enjoy this feast for the ears. Of course, Gerald Hambitzer, professor for Old Music at the HfMT Cologne, and Sigrun Stephan are also guarantors for a particularly nice concert. Also, the musicological part of this concert was not neglected, as both lectured interesting information about the instruments and of course also about the composers. It might surely have surprised one or the other that the clavichord dates from the 14th century, making it one of the oldest stringed keyboard instruments. This is all the more astonishing, as this is an instrument that already allows a stepless dynamic keystroke, which only succeeded again with the fortepiano centuries later! In addition, it allows the performer a kind of “vibrato” that was beautifully performed by both musicians in this concert. Technically, it’s a bit like the harpsichord in that it picks the strings, but it’s a much quieter instrument. Thus, you can only play it in a medium-sized room and probably won’t find it anywhere near a Philharmonic. By the way, one of the hallmarks of the concerts by Gerald Hambitzer and Sigrun Stephan is the generous gift of cough drops before the concert!
But once you get used to the volume, you experience a sonorous instrument that with the right technique (like many old instruments it is incredibly sensitive and forgives the interpreter no error) generates a restrained, but nonetheless a gently roomfilling sound. Even the fine bass offers a depth that you would not believe! 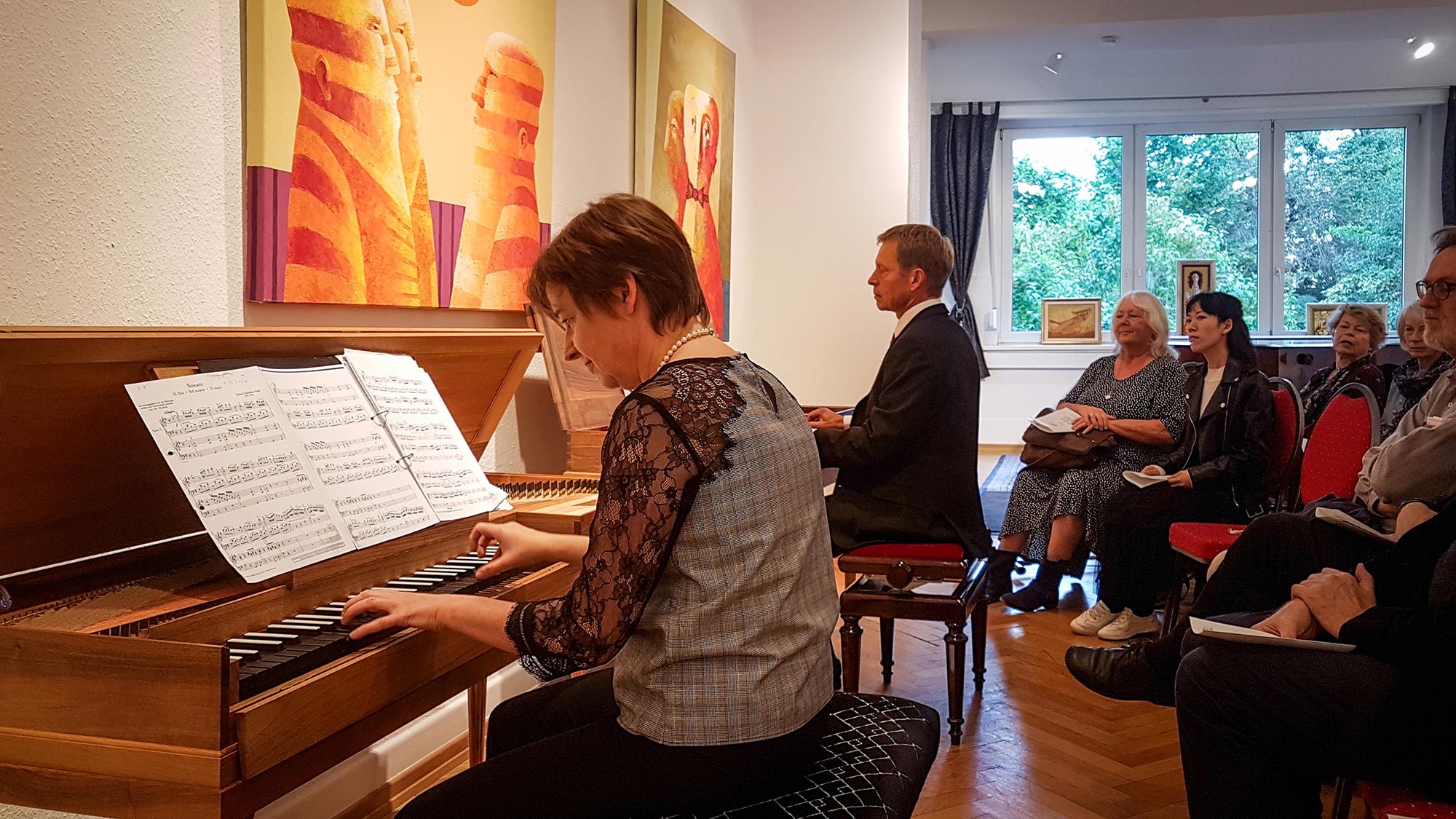 When listening to clavichord music, the connoisseur immediately thinks of Johann Sebastian Bach, of course, who not only knew but loved this instrument deeply. However, this concert was not dedicated to him, but much more to his sons Carl Philipp Emanuel, Johann Christian and Wilhelm Friedemann. Of course, Wolfgang Amadeus Mozart was also represented, who met Johann Christian Bach in London and was supported by him. Likewise, the composer Christoph Schaffrath, who also lived in the times of the Bach family and who competed with them, could also be heard.
Into all the works, which were mostly performed in a duo, but sometimes also performed as solo pieces, the two musicians breathed life in a wonderfully soulful way, without attracting too much attention to their own person during the sometimes very demanding passages. Much more, all the elements of the music fit in their intended place, so that the works were reproduced as realistically as possible according to the old performance practice.

Sigrun Stephan has been admired several times with her extraordinary feeling for old music in the Musicstudio, most recently in 2017. Now she is represented twice this year, because on the 26th of October the next concert will follow, but then with harpsichord and lute!
This concert promises to be a very special experience: together with Gerald Hambitzer, the two musicians will perform on two clavichords! Gerald Hambitzer, Professor for Old Music at the HfMT Cologne, has performed several times in the Musicstudio as well and was able to inspire the audience again and again.
The program includes pieces by J.C. Bach, C.P.E. Bach, W.F. Bach, W.A. Mozart and C. Schaffrath.
Look forward to a unique concert with these two musicians!

Born in Eisenach, the same city as Johann Sebastian Bach was born, the harpsichordist Sigrun Stephan was already filled with pride as a child. In Weimar, where she attended the special school of music and where she later on studied piano at the college, she was daily reminded by a memorial plaque for Wilhelm Friedemann and Carl Philipp Emanuel Bach that there are other wonderful keyboard instruments in addition to the piano.
The desire to explore the harpsichord brought her to the Ruhr area, where she devoted herself to historical keyboard instruments at the Folkwang University of Essen. There she also had a lectureship after completing her harpsichord studies. Sigrun Stephan plays continuo in various ensembles, is a soloist and participates in numerous CD productions.
Since 2006, Sigrun Stephan has devoted herself intensively to the clavichord and has specialized as a soloist on this expressive, sensitive instrument. Her motto “Volume proves nothing!” comes from Mark Twain.

Gerald Hambitzer was five years old when he heard unusually bright sounds in the background of a television program. At first no one could explain to me which instrument that was until I got out of the way: The sounds came from a keyboard instrument that was played in the baroque era. Even today, Gerald Hambitzer experiences that the harpsichord is confused with other keyboard instruments. He himself got used to the instrument early, for example when he was attending concerts with his parents or playing on the harpsichord of his school. Through his father’s record collection, Gerald Hambitzer soon discovered his love of historical performance practice. Certain movements always seemed boring to me as a child until I heard a recording by Nikolaus Harnoncourt. Without knowing where the differences lie, this fresh style of play immediately fascinated me. Gerald Hambitzer studied piano and harpsichord with Hugo Ruf at the Hochschule für Musik in Cologne. After graduation, he first received a teaching assignment, later a professor of historical keyboard instruments. Early on there were traditional courses for harpsichord, recorder, lute or viola da gamba at the Cologne University. It was my goal in my academic work to implant the findings of historical performance practice in these courses. I say this with pride, because today I’m head of the Institute of Old Music. Gerald Hambitzer is one of the founding members of Concerto Köln. At first I was inspired by the opportunity of the orchestra to have a job as a student and to play together with a large ensemble. I also find it fascinating that we come from very different countries. It is not always easy to reach consensus, but diversity is very rewarding. In addition to his high school activities and working with Concerto Köln, Gerald Hambitzer plays in various chamber music formations. He also devotes himself passionately to the Fortepiano and the Clavichord. What I love most about my job is concerting on stage when – with Concerto Köln – things happen that have not been arranged. When we are in the “flow”, then all the previous tension is forgotten. Gerald Hambitzer can recover very well on long walks and gardening.

The next concert takes place on 26.10.2019:
Sigrun Stephan (harpsichord) and Andreas Nachtsheim (lute) present music from the 16th to the 18th century, with a reading from “On the handling of people” by Knigge